DEPRECATED: How to connect Firefox for Android to self-hosted Firefox Account and Firefox Sync servers

Firefox for Android 44 and above no longer require an addon to connect to custom Firefox Account and Firefox Sync servers.

Firefox 29 was a huge release. The two largest items were, by most measures, the new Australis Desktop theme, and the new Firefox Accounts sign-in to Firefox Sync. In the rush to land the new Firefox Account sign-in, we pared our feature set aggressively. One of the things that got delayed was support in Firefox for Android for connecting to self-hosted Firefox Account auth servers, and to self-hosted Firefox Sync servers. I’m thrilled to announce that support for such self-hosted servers has just landed in Firefox Nightly, and should make it to release as part of Firefox 33. 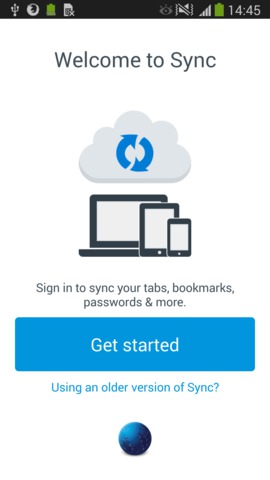 Historically, connecting Firefox to a self-hosted Firefox Sync server was — if not easy — at least possible and supported in all products, including Firefox for Android. The new Firefox Accounts system introduces a redesigned, easy to use sign-up/sign-in flow that delivers great user value, but it’s complicated to host your own servers. Instead of talking to a single Firefox Sync server, you need to talk to a Firefox Accounts auth server and a Firefox Sync server, both working in tandem to provide your service. Dan Callahan has been leading the effort to clarify the self-hosted server side of the story, and we have work in progress documentation explaining how to use self-hosted servers (in Firefox Desktop).

Firefox for Android 33 lets you

Let’s see how to use the new features.

These URLs are a bit magic, and it’s not currently possible to change them on your Android device without deleting the Android Account and starting again.

This should match the identity.fxaccounts.auth.uri preference in your Desktop Firefox configuration.

You can get a decent idea if your URL is correct by doing an HTTP POST with /account/login appended to your auth server URL. You should get an HTTP 400 response, like:

The Firefox Sync token server URL should look like:

If you are using a custom token server, it’s "public URL" should be set to http://domain.com:5001.

You can get a decent idea if your URL is correct by doing an HTTP GET after dropping the 1.0/sync/1.5 from your token server URL. You should get a list of services; for example:

First, let’s install Firefox version 33 (or higher). You can download a recent Firefox Nightly here. Download the fennec-33.0a1.multi.android-arm.apk file and install it on your device. Open Firefox.

Tap back several times to return to Firefox. We need to install a custom Firefox for Android add-on called fxa-custom-server-addon. This add-on lets us specify self-hosted servers [1].

Tap the link above in Firefox for Android, and click the (hopefully green!) Add to Firefox button. Since this add-on is hosted at the Firefox for Android Add-ons site, you should not see a warning when you install. (If you do, Allow the installation, and then Install the downloaded add-on — and please let me know.)

After you see a toast saying that the add-on is installed, tap the menu. You should see a new Custom Firefox Account menu item, right at the bottom. 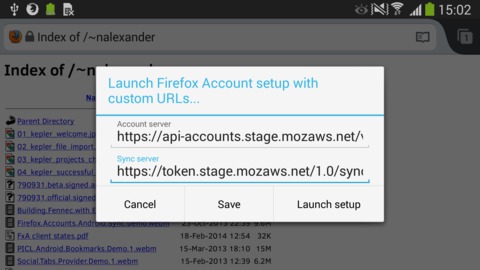 From the menu, tap the new Custom Firefox Account menu item. Now you can enter your self-hosted server URLs! The Save button closes the dialog but keeps your entered URLs for next time; it makes it easy to copy-and-paste your URLs from elsewhere. When you’ve got your URLs correct, tap Launch Setup. (It can help to flip your device to landscape mode.) 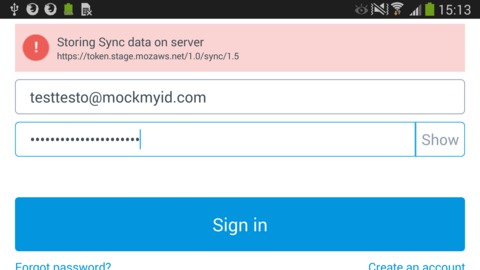 I have already created an account on Mozilla’s staging test servers, so I’m going to sign-in to it. I tap Sign in, and I see that my account has already been verified. I tap Back to browsing, and I’m back in Firefox, with my shiny new Firefox Account ready to Sync.

Note: When this was written, there was a bug with custom servers with non-standard ports (in Firefox for Android 33 and 34 only). Bug 1046020 fixes an issue where custom servers with non-standard ports (i.e., servers with a non-80 port for HTTP or non-443 port for HTTPS) failed to sync. The failure looked like an authentication error when requesting a token from the token server. The fix is in Nightly 34, has been uplifted to Firefox 33, and should be present in Aurora 33 by the end of August. Many thanks to user Ben Curtis for reporting and fixing this issue! 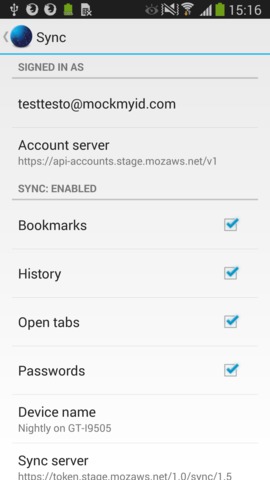 Let’s verify that our device is connected to a Firefox Account and is healthy by inspecting our server URLs in the Firefox Account settings. Tap the menu, and then Settings > Sync. Observe that we have two new sections, labeled Account server and Sync server. You should see the self-hosted server URLs you entered in the sign-up/sign-in flow [3].

You can also watch the adb logcat while syncing to see what URLs are being used [4].

The fxa-custom-server-addon has done its job, and you can safely remove it entirely: tap the menu and then select Tools > Add-ons to uninstall it.

Firefox 33 allows you to

We hope Firefox for Android works well with your self-hosted servers!